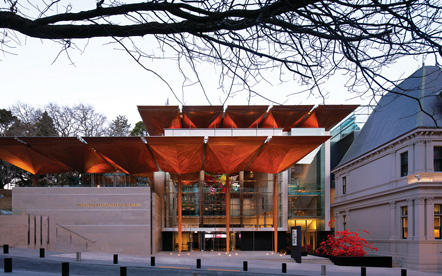 Auckland Art Gallery Toi o Tāmaki has won the International Award for Architectural Excellence from The Royal Institute of British Architects - the first time a New Zealand building has won.
The awards, the winners of which were announced last Thursday, are given to only 12 buildings a year and recognise some of the world’s most imaginative, dramatic and green buildings. Other winners in 2012 include the world’s tallest building, the Guangzhou Finance Centre. From this round of winners, a visiting jury will select the winner of the prestigious Lubetkin Prize.

“We set out to develop a world class gallery and FJMT+Archimedia’s elegant and considered design has been instrumental to achieving that goal. Judged on the response of the near 600,000 visitors to date, this heritage restored and expanded building has become a flag-bearer for the city’s architectural and urban design future,” says gallery director Chris Saines.
The development of Auckland Art Gallery Toi o Tāmaki was commissioned and project managed by Auckland Council and included a series of emblematic, sculpted tree-like canopies cut from massive kauri trees that enclose the forecourt, atrium and gallery areas.
This international award comes within a month of the gallery also winning the supreme award, the New Zealand Architecture Medal, at the New Zealand Architecture Awards and the highest accolade as the country’s top commercial property development for 2012 at the annual Property Industry Awards.
Projects such as this reflect Mayor Len Brown’s vision to make Auckland the world’s most liveable city and are a strong benchmark for other developments and transformations in the city centre planned by Auckland Council as part of the City Centre Master Plan.
Since reopening in September 2011, Auckland Art Gallery has had almost 600,000 visitors.
“It’s great to see one of our finest facilities recognised, as well as widely enjoyed by both Aucklanders and visitors,” says Sir Don McKinnon, chair of Regional Facilities Auckland, a council-controlled organisation.
Entry is free to the gallery and its collection-based exhibitions, but there are also regular paid exhibitions. Find out about the gallery’s latest paid exhibition, Home AKL - a dynamic exhibition presenting works by Pacific artists, most of whom live in Auckland.
Full list of awards won by Auckland Art Gallery Toi o Tāmaki in 2012:

What do you think? Share you comments with us...